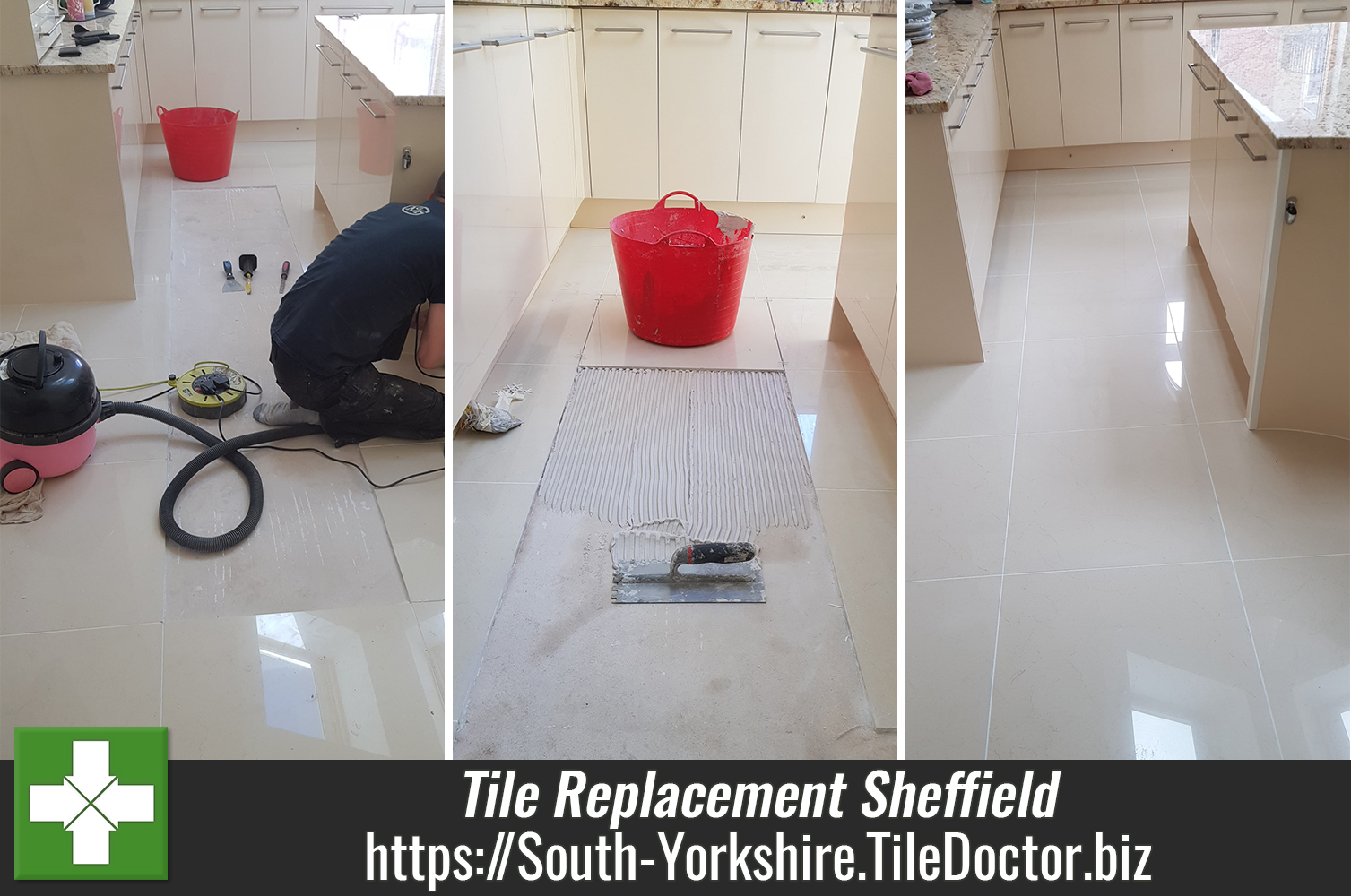 The owners of this property in Sheffield’s famous Ecclesall Road were so fed up with the discoloured White grout in their Porcelain Tiled Kitchen they decided to replace it themselves. So, armed with new grout and a grout removal tool from a budget supermarket chain they set about the work. Unfortunately, twelve of the tiles became chipped at the edges during the process and what started as a good idea soon turned into a DIY disaster.

Having given up on the project they called Tile Doctor to see if we could get it restored for them. Having completed a lot of tile renovation work in Sheffield I got the call to visit the property and come up with a plan to resolve the situation. It’s difficult to repair chips in Porcelain tiles, especially along the edges so I recommended removing and replacing the chipped tiles and then give the floor a facelift by recolouring the grout back to white. I also recommended throwing the cheap grout removal tool in the bin in case they were tempted to use it again.

If you’re not familiar with Sheffield, you should know that the Ecclesall Road stretches 3.6 miles from the city centre South West of Sheffield to Whirlow. It’s a busy trading area with shops, restaurants and many green spaces, its also considered to be one of the most affluent districts.

We started by removing all the grout from around the damaged area taking care to avoid damaging the neighbouring tiles as we chiselled the damaged tiles out. Once all 12 polished Porcelain tiles were removed and the debris cleared up replacements were fixed in place then and grouted them.

Luckily, the client had been able to source some of the same tiles, which avoided the need for a complete renovation.

We left the tiles to set and dry overnight and returned the next morning to compete the next part of the job to renovate the grout.

Before applying the Grout Colourant, the floor was given a general clean and then the grout given a scrub using Tile Doctor’s Grout Colourant Pre-Treater. This product cleans and slightly etches the surface of the grout to ensure a stronger bond with the colourant. 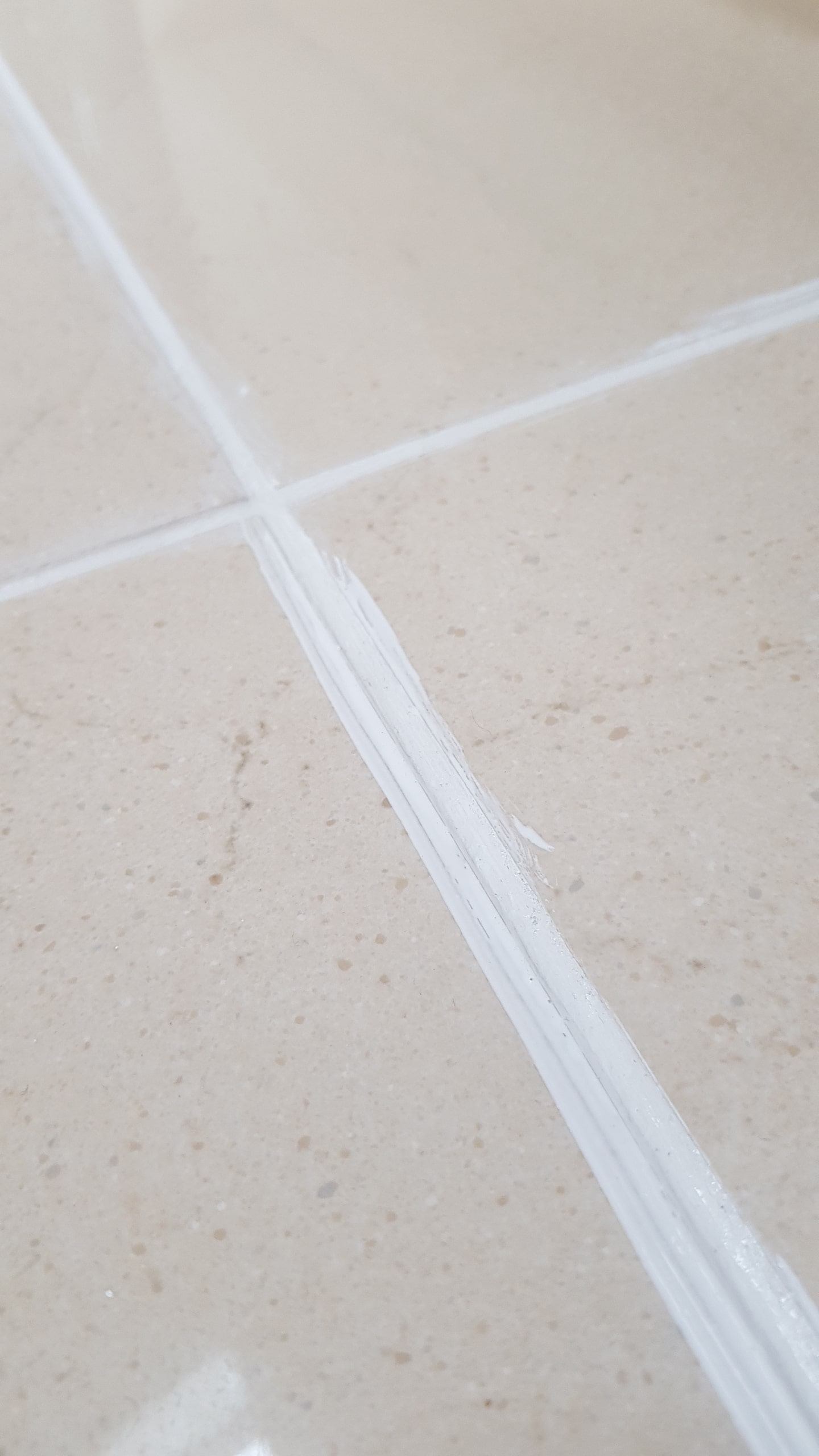 Once the grout was dry a White Tile Doctor Grout Colourant was applied over all the grout joints. This is a delicate job which needs patience, and you have to remember to remove any excess colourant off the tile quickly before it dries. It’s worth mentioning that the Tile Doctor Grout Colourant range is available in 10 different popular shades, so it is a very versatile product, which can bring back to life many tiled surfaces. In this instance it made the grout look sparkling white, now the grout lines have been coloured the grout will stay stain free and bright white. 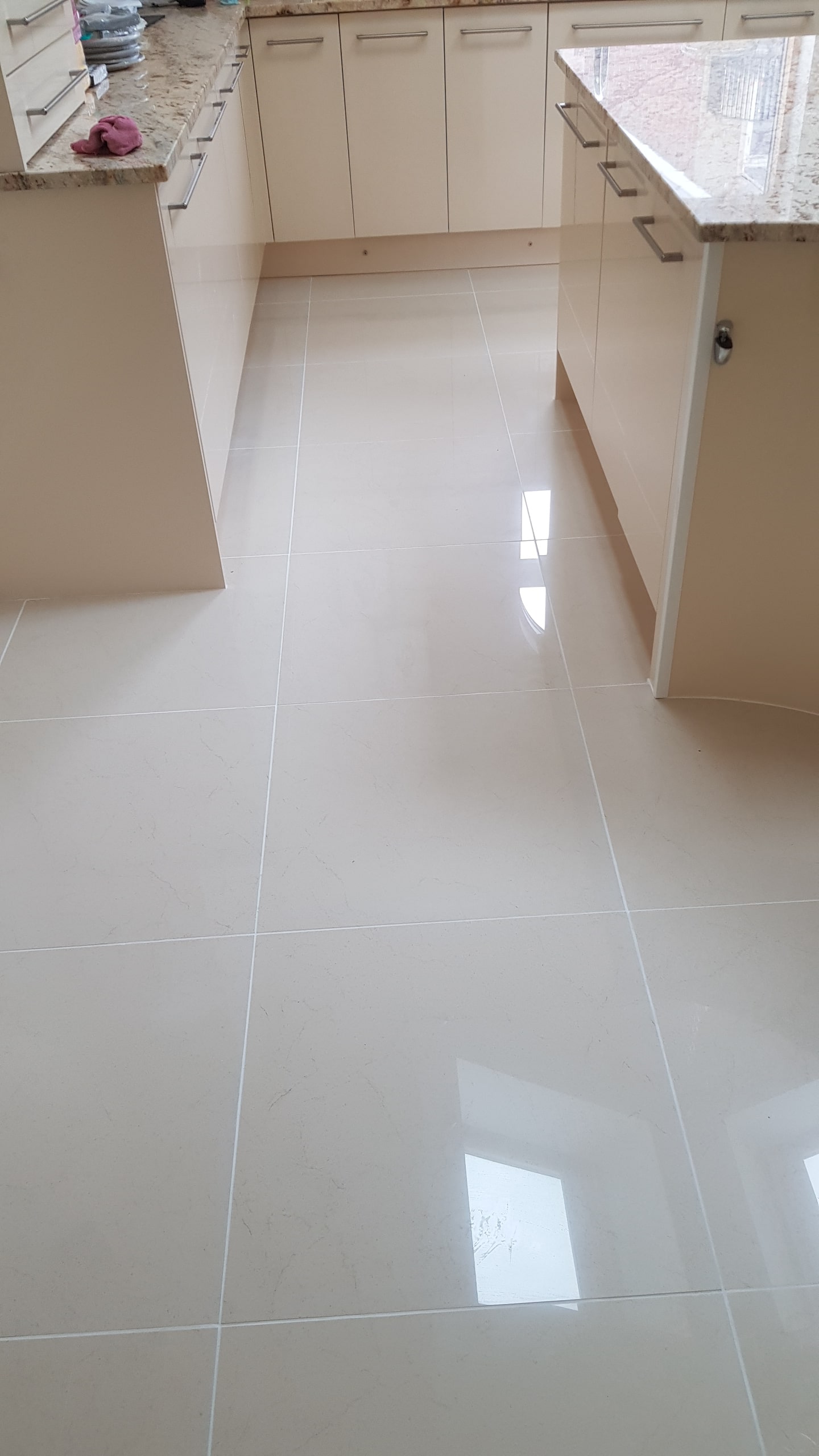 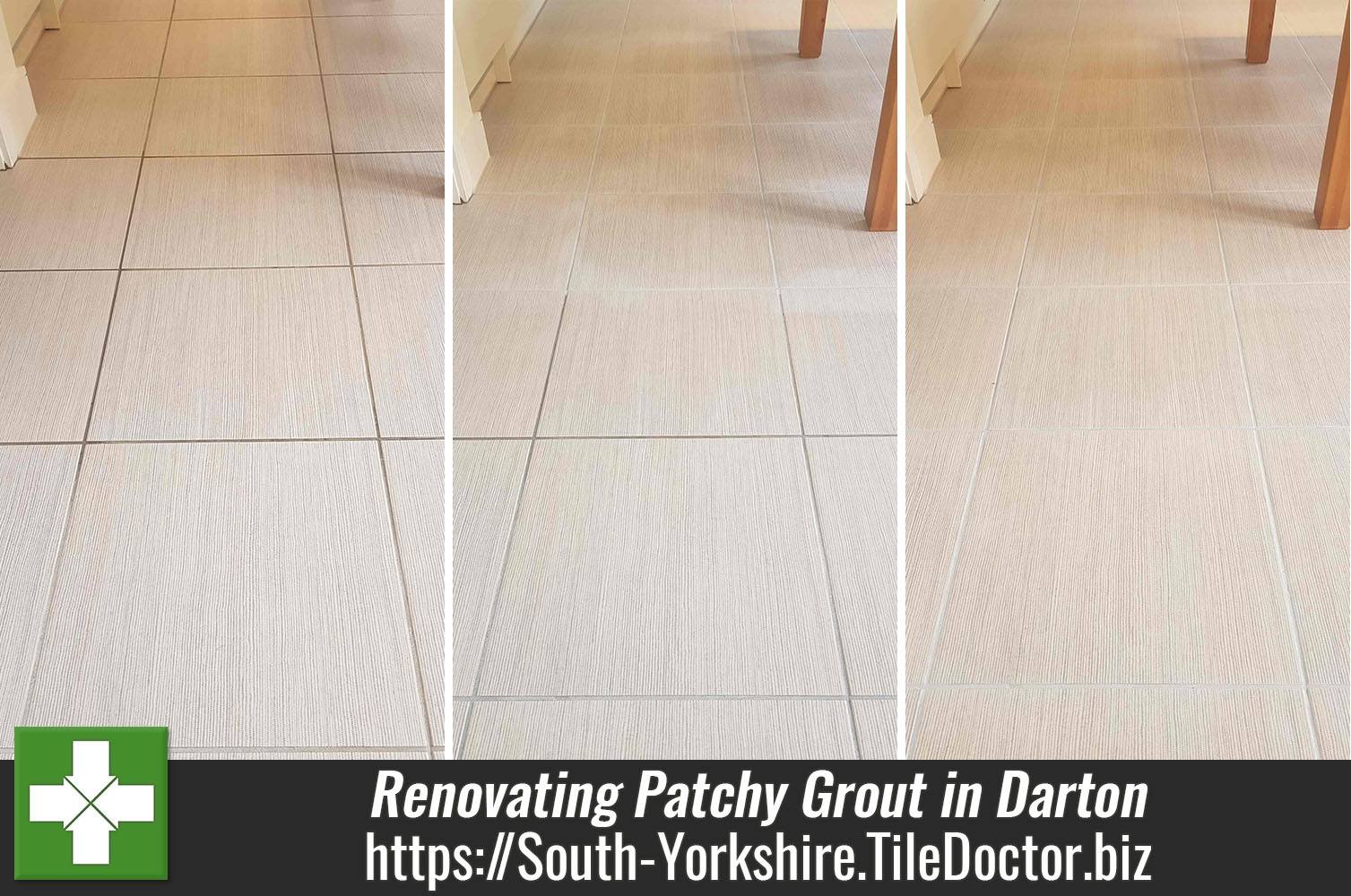 Recently it seems I am getting called out to an increasing number of new builds to sort out patchy grout issues. The reason why there have been so many issues arising is a bit of a mystery, but I put it down to a combination of things like poor quality grout, rushed installations, wet subfloors and the use of different batches. 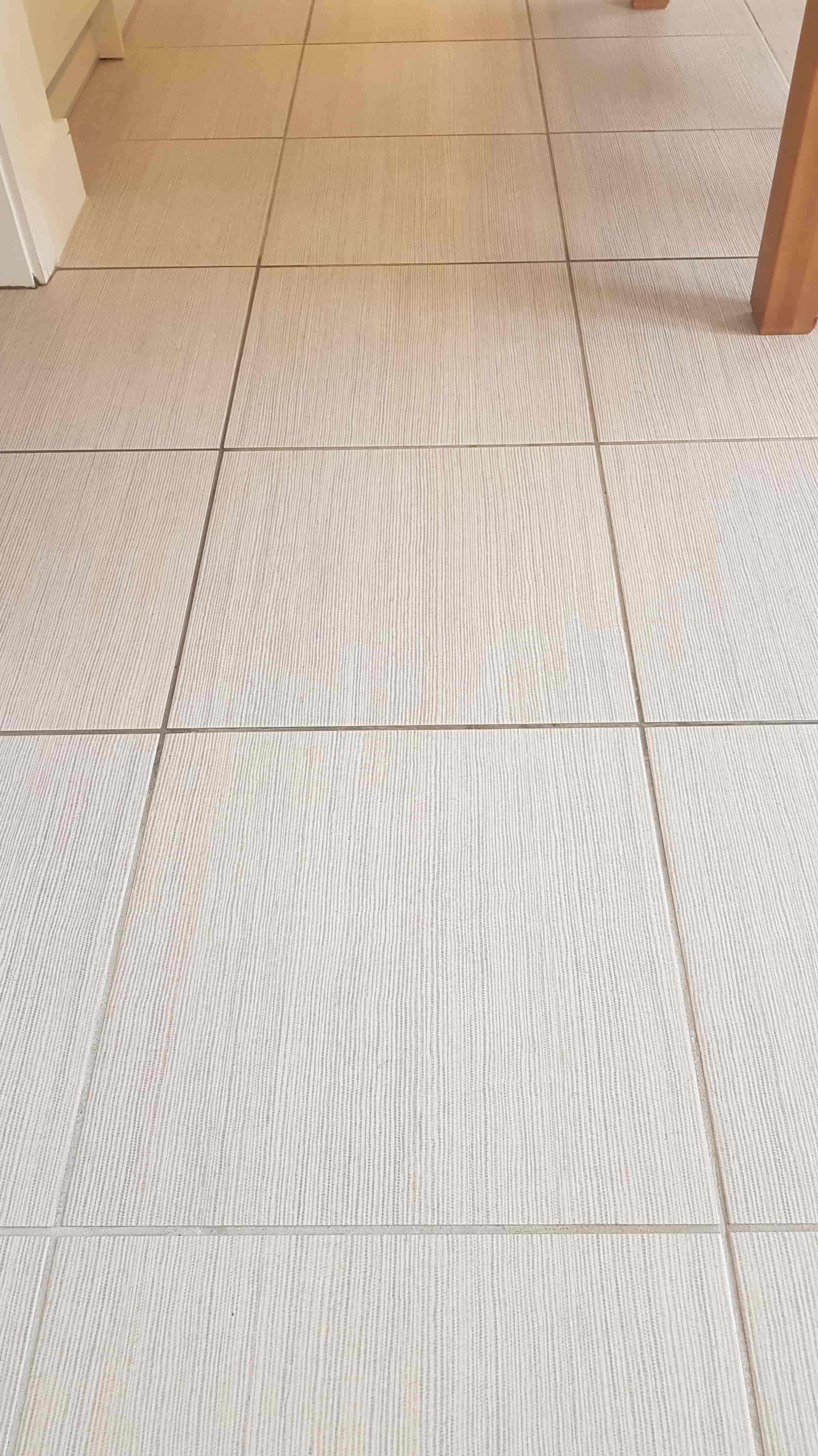 This recently built house in the village of Darton is a great example and in this case, I suspect two different batches of the same grout had been applied. Darton by the way is a small village in the Borough of Barnsley.

Invariably these problems are picked up by the new owner on their snagging list, with the tiler long gone and the builder keen to get their final payment it is always a tricky situation to resolve. I find the best solution is to apply a Tile Doctor Grout Colourant, it’s a much quicker process than removing the old grout and replacing with new. Most new homeowners would not appreciate us ripping up their brand-new rooms and generating lots of dust in the process! Also, by using the Tile Doctor Grout Colourant it adds a barrier of the grout preventing dirt from discolouring it further down the line.

Even though the house was brand new, the Porcelain Tiled floor was not looking great. The client was happy for me to go ahead and would take up the bill with the housebuilder. I first pre-treated it with Tile Doctors Grout Colourant Pre-Treatment. This removes any contamination from the grout which might affect the adhesion of the colourant and being an acid, it also etches the surface of the grout to ensure a superior bond with the colourant.

The client chose our Light Grey colour which is one of 10 colours we offer. Once the pre-treatment had been applied, scrubbed, rinsed, and vacuumed away the floor was left to dry. Once dry we started applying the colourant, this is done with a small brush (a toothbrush is ideal) carefully scrubbing colourant into each grout joint and wiping off any excess that gets on the tiles before it is able to dry. 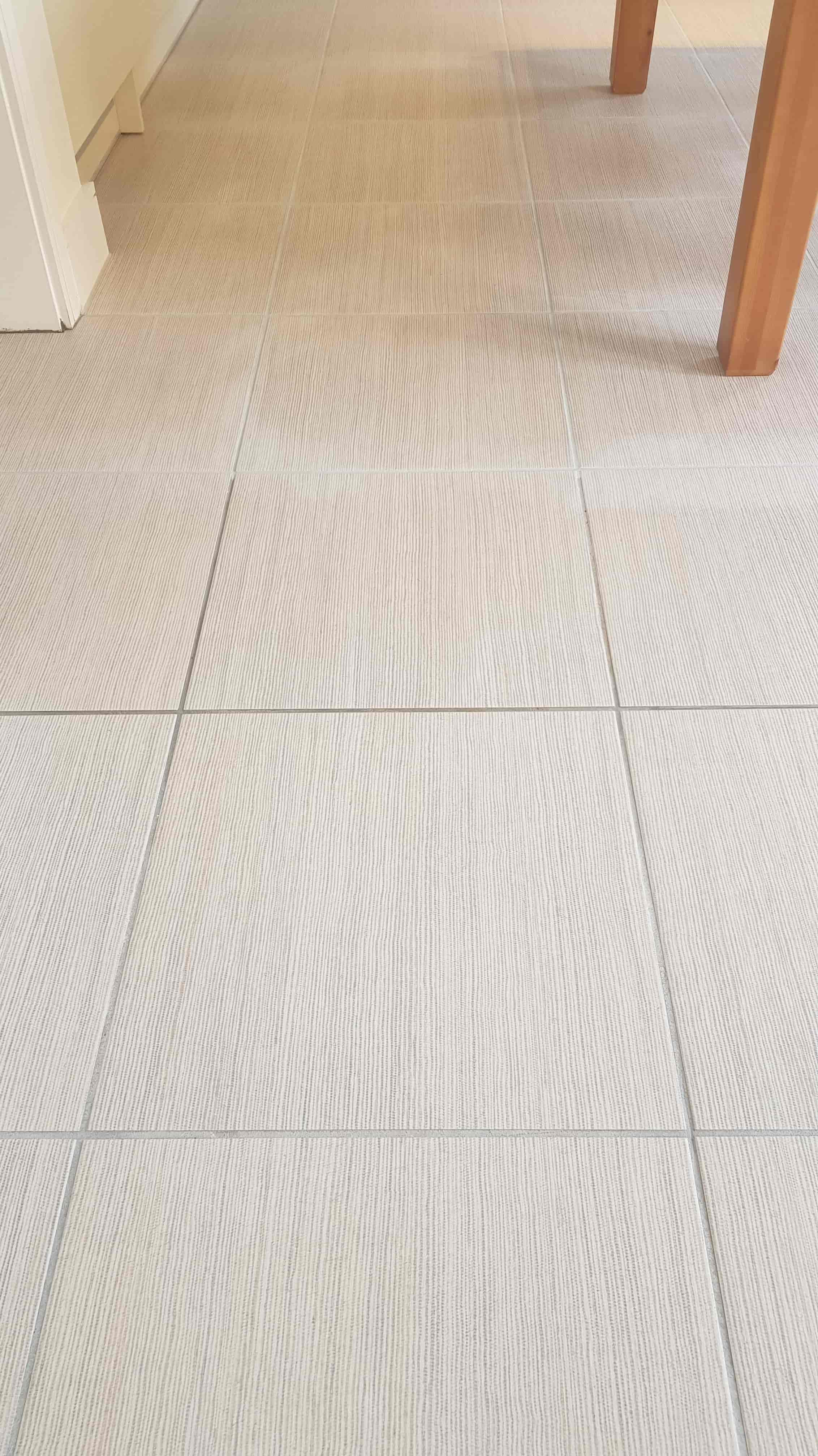 Once complete the newly coloured grout lines totally transformed the floor and because the grout colorant is epoxy based the grout lines will stay stain free and never get dirty.
The porcelain tiles were factory sealed so there is no need to apply a seal to the floor.

I recommended the use of Tile Doctor Neutral Tile Cleaner to keep the floor in the best condition. It is pH neutral so is far less harsh on the surface than the everyday household cleaners available. It has a minty fragrance and is mild enough to use daily. They were very happy that the floor now looked as it should have from the start and was the finishing touch to their beautiful new home. 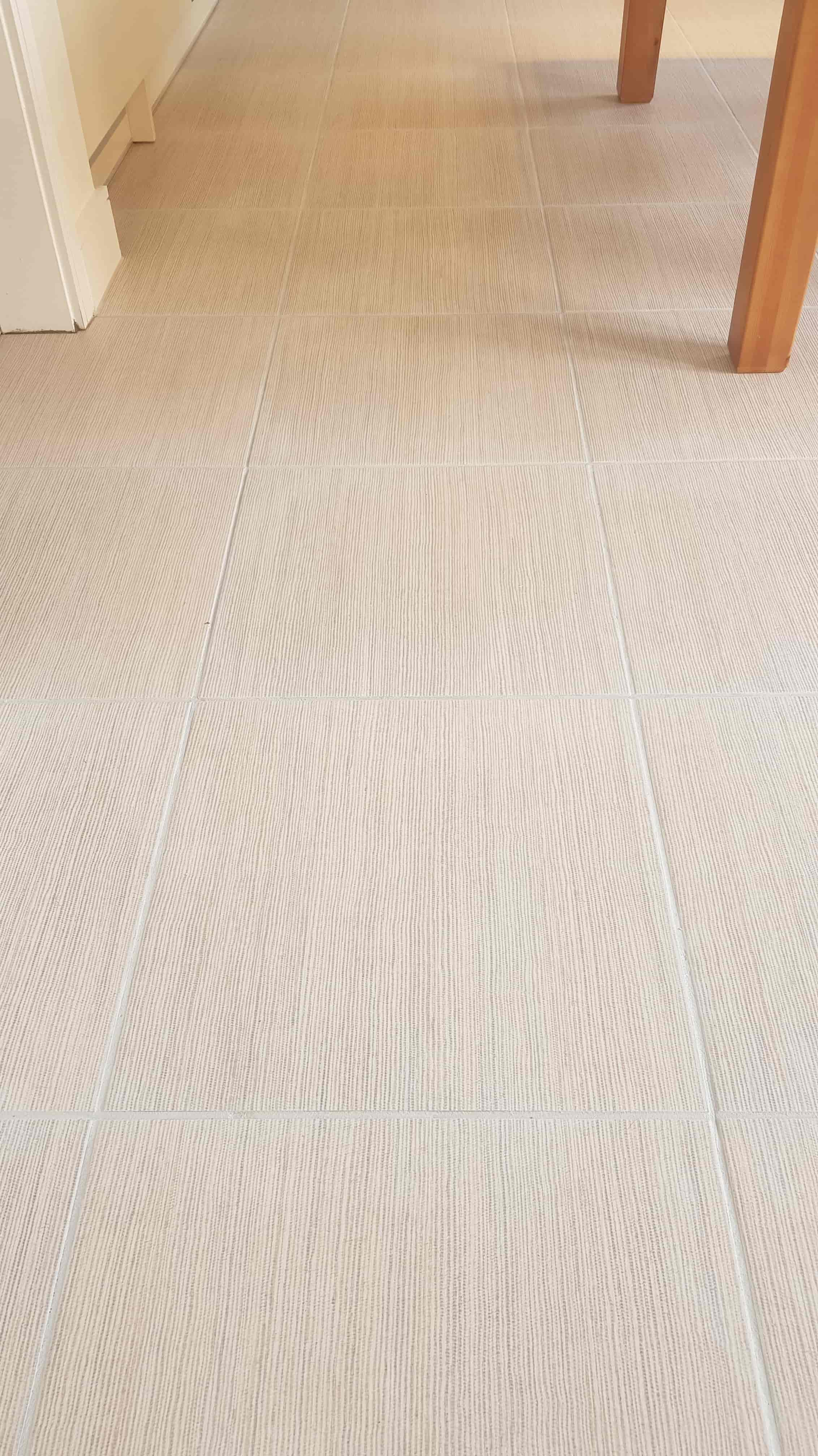 We were contacted by a family from Hillsborough, which is a suburb of Sheffield, who had seen some of the work we do renovating shower cubicles on the internet and wanted to know if I would do the same for their shower.

One of the biggest problems affecting bathrooms is mould which thrives in a warm damp environment, the best way to prevent it is to extract the moisture created when having a shower with adequate ventilation. Other steps you can take to reduce mould include always leaving the door open after a shower to improve cross ventilation and rinsing the shower down with cold water afterwards. Tile Doctor also have a product called Aqua-Pro that you can spray on your tiles after use.

I went over to take a look and could see that the Ceramic tiles were only slightly stained and would no doubt clean-up easily however the grout had gone black in places with mould and orange in others due to the dyes in shampoos and soaps. Ceramic tiles are glazed and so usually very easy to keep clean however grout and silicone is more vulnerable and if you now cleaned on a regular basis mould can get a grip and it can prove very stubborn to remove. 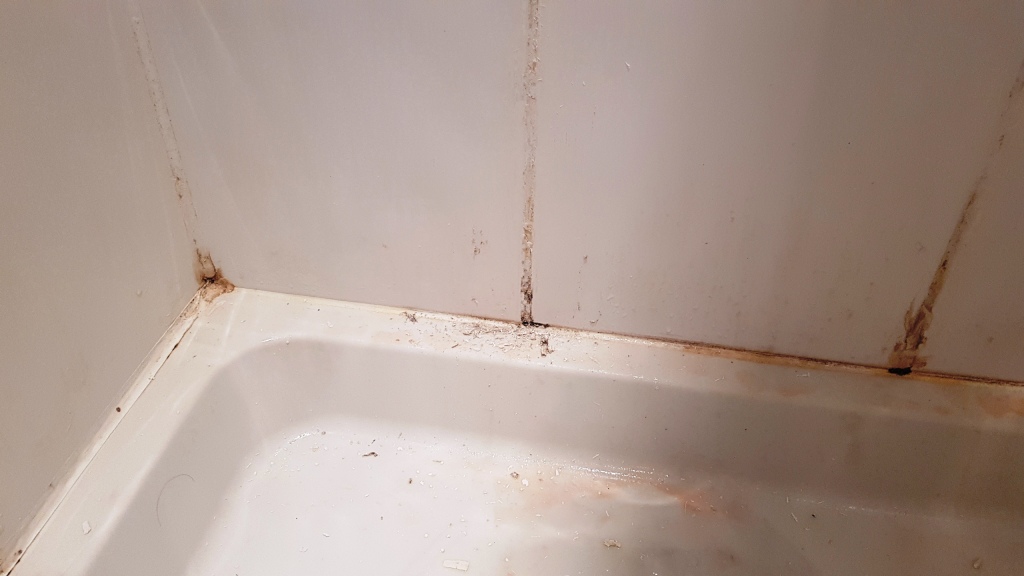 The home owners had tried to rectify the problem before by applying more grout and silicone to the affected areas however this hadn’t cured the ventilation issue, so it wasn’t long before the problem resurfaced. I recommended replacing all the badly affected grout and the silicone sealer strip around the base of the shower to give the cubicle a fresh look.

My first task was to see how far we could get by cleaning the tile and grout using Tile Doctor Duo-Clean which is designed for use in bathrooms where it’s effective at cleaning grout and removing mould. It comes in a spray bottle so it’s just a question of spraying it onto the tile, grout and silicone and leaving it for ten minutes before scrubbing it in with a stiff brush or scouring pad. The soil was then rinsed off the tile and grout and the shower left to dry off for a while, so we could see which areas were so badly stained would need re-grouting.

The next step was to carefully remove the old silicone sealant from around the edges of the shower cubicle using a sharp knife, then using a combination of power tools and blades we removed the grout in the affected areas and put in new white grout to match the exiting.

While the grout was drying, the shower tray was cleaned up and new silicone sealant has added around the base of the shower cubicle using a premium mould resistant silicone that should be more resistant to staining. 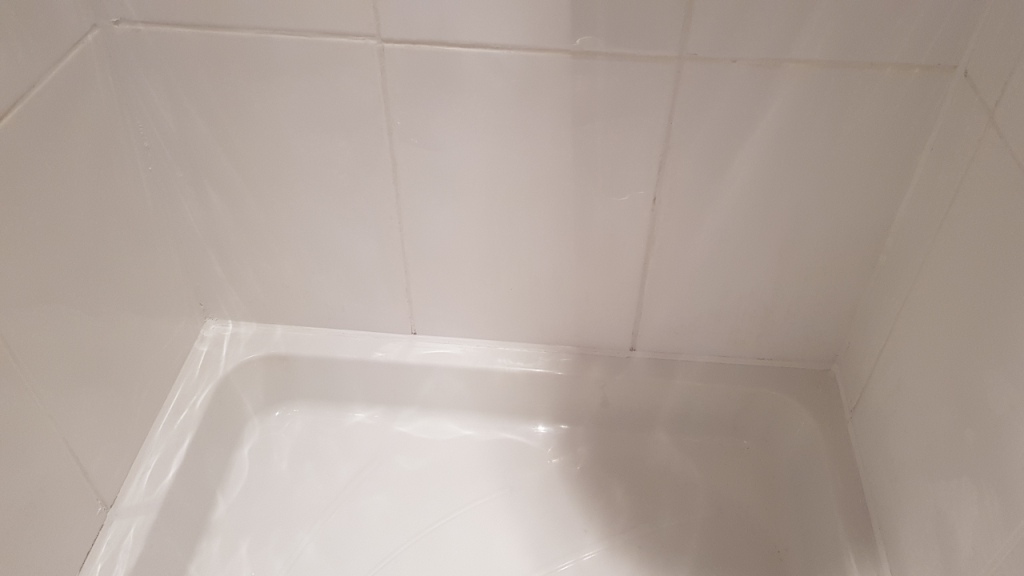 The combination of cleaning and grout replacement worked a treat and the shower looks like a brand-new installation. This doesn’t resolve the ventilation issue, so I left the customer with a bottle of Tile Doctor Aqua-Pro with instructions to spray the tiles down regularly in order to keep it looking fresh and clean. 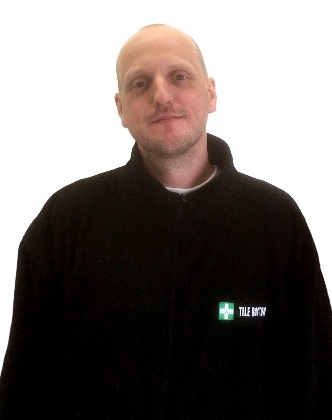 Matt did a great job on my conservatory floor. It looks like it did when first installed nearly 30 years ago. Very professional service, very pleasant and kept me updated as the job was going on. Have already recommended to a neighbour.
Jane T, Sheffield

Really pleased with result. Matt was very professional and friendly. Would definitely use his services again and recommend him to family and friends.
Lindsey C, Mexborough

What a brilliant job Matt. We are beyond happy with how you’ve brought our old and tired hallway floor back to life, I bet it didn’t look this good 120 years ago Nothing was too much trouble, very professio al, informative and knowledgeable. We could not be happier with the amazing job you’ve done. Thank you so much #1 Tile Dr
David P, Grimsby

This was a great job, carried out professionally under difficult circumstances. The floors – terracotta and flagstone- both look brilliant and Matt went the extra mile to help.
Julia , Doncaster

Matt’s patience during emails subsequent to his initial visit was outstanding. He went above and beyond to help me make the decision on the final finish. He worked non-stop on the two days he was here and answered all my questions honestly, never agreeing to anything he could not deliver. I am one happy customer.
Terry H, Sheffield

We moved into a house where the kitchen floor looked very neglected! But now our kitchen floor now looks great! Nicely clean and sealed and looks well cared for!
Natalie S, Hull

Very helpful and professional, listened to our requests and gave constructive suggestions. Was able to complete work in timescale, kept us informed throughout price and estimate of work to be completed agreed before start. Very pleased with work completed.
John P, Grimsby